I lost an old friend today.  Though I haven’t seen her for years, it only seems like yesterday when we last spoke. We had reconnected recently on Facebook.  She was doing well, living in the house she grew up in, and taking care of her mother.

I met Melissa in 1971 at Northview Junior High, seventh grade, first day of school.  I was standing in the lunch line and Melissa asked me about a birthmark on my fore arm. It’s large, and resembles a map of the United States. I looked her in the eye and told her with a straight face that it was a hickey! I was all of 12 years old and had never had a hickey, but I’ve always been a smartass. Melissa looked away and busted out laughing. From that point on we became best friends.

I started riding the bus home after school to hang out at her house. Her house backed up to a park, and she always had good snacks.  I thought her family was rich because they had a microwave! Remember this was 1971, and no one had microwaves in their homes. Wow! How cool!  One of our favorite after school snacks were frozen glazed donuts that we would microwave. OMG! Best snack ever! Those doughnuts were the high point of my day. And because of those darn doughnuts, I didn’t buy my first microwave until I was 27!  I was convinced I would end up eating frozen glazed doughnuts all the time and weigh 800 pounds!

Melissa was the youngest kid like me.  Her older sister had a 1970’s white Triumph Spitfire convertible that I thought was so cool.   (Melissa would later buy said car).  Melissa had an older brother Eddie who was always so nice to me. They had a camper in their back yard that was the best hang out for a couple of 12 year old girls. We had so much fun hanging out with her neighbors Craig, Lisa, and her cute brother Mark. I had a crush on him; he was fine, but too short for me. Ha! 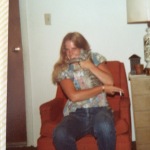 This is Melissa in 1978. She had the best smile, always lit up the room.

Melissa and I had quite the adventures. One of our adventures involved a weekend party at my house, and no parents around.  We were all of 14. Yeah, I took the car out for a spin.  Melissa stayed back at the house, which was probably a good thing. Unfortunately, we got caught, and Melissa couldn’t stay over at my house anymore. Nothing got wrecked; we didn’t think it was a big deal, not so for the folks.

Middle school is such a tough time for most kids. Eighth grade was very difficult for me; I was always getting into trouble.  Melissa always had my back, and she never judged me, and for that I will always be eternally grateful. Her delightful mom pierced my ears! She has the best family, so warm and welcoming.

I’ll never forget the time Melissa and I were hanging out in my front yard one afternoon.  All of a sudden Melissa is screaming her head off, I turned around and my goofy cat was peeing on her back. The cat was about five feet away from her, and the pee was shooting straight out of his butt! OMG, I don’t think I ever laughed so hard in my life.  Melissa wasn’t too amused, but after she got cleaned up, she was laughing too. Then there was the time we were riding our bikes, and her neighbor Craig, totally wiped out in front of us, he went right over his handle bars. We stopped to make sure he was okay, and then proceeded to laugh our asses off at him. It was pretty funny. Sorry Craig.

Melissa had the best sense of humor; we were always cracking each other up. She would say something clever, and do this side look and grin she always did.

I spoke to Melissa on the phone in 1996, but last saw her at our 10th high school reunion.  I was there with my brother, and she was with our friend Deedee.  We had so much fun, I had forgotten how truly clever she was.  I’m so glad I got to connect with her again.

I do hope her children find comfort in knowing that their mother was a very important person to me all those years ago. She will be truly missed.